Cherubs Casanova, “Squishy” is a modern example of the beauty, athleticism and trainability of the Welsh Mountain Pony.  Combining desirable Welsh breeding with impressive sport pony ability, Squishy is the perfect choice for breeders wanting to improve temperament, size and performance in their offspring. His ISR/OLD NA lifetime approval allows a unique opportunity for mare owners to create truly special sport ponies that are eligible for registration as ISR sport ponies and/or Half Welsh. Squishy is one of the most winning Section A stallions with consecutive Welsh American National Championships in-hand and over-fences and a proven performance record in Hunters, Jumpers and Dressage. He continues to demonstrate his versatility in driving and combined training while consistently producing high-quality reproductive ability for live color breeding and cooled shipments. His kind temperament, trainable mind, idealic appearance, breeding ability and natural athleticism make him a pony like no other! Most obviously appreciated though, Squishy is GORGEOUS! Wherever he goes, he gets attention. Possessing nearly ideal coloring, muscling, and conformation, he is always a favorite of judges and breed inspectors. Squishy’s good looks transfer to his get, many of which are known for their chrome, dishy faces and marbled blue eyes.

Cherubs Casanova carries an incredible combination of top Welsh Mountain Pony breeding lines such as: Friars, Farnley, Liseter, with heavy Coed Coch breeding deep in his pedigree. Although his pedigree reads as “driving bred”, his breeder, inspectors and we have found him as talented as a Hunter/Jumper/Sport type pony in both aptitude and movement.

Squishy’s sire, SER Special Superman, was imported direct from Wales and comes from top bloodlines. His grandsire Friars Superman was an outstanding medal winning stallion who was exported to Holland in 2003. Before being exported Superman was retained and used at stud at Friars where he sired some exceptional foals including Friars Supernatural (Overall Champion at the Welsh National Show) and Friars Superstition (Champion at the Northern Counties Pony Association Show). A great success as a stockgetter in Holland, Superman continues to sire some exceptional foals including Ciejans Arjan (Best Foal 2005 section A and International Overall Reserve Foal Champion). He was then sold to Jan Hazeleger of the `Centannial Stud`at the Fayre Oaks Gala Auction.

Great Grandsire Friars Fancyman was the winner of many championships when shown as a youngster, including Champion Yearling Ponies UK and Silver Medal Winner at Cheshire County Show.

Cherubs Casanova’s Damsire is the well known section A stallion Clarwood Joy Ride who is sired by the recently deceased champion dun Sec. A imported stallion Springbourne Carousel and his dam, Liseter Royal Joy, is a daughter of the famous multi champion mare, Liseter Gladness. Joy Ride is also the sire of Evans Matilda The Dragon and Evans To Betsy.

If you investigate further back into his bloodlines you will find heavy Coed Coch breeding, and blood from champion lines. There is no doubt in the strength of this pedigree!

His overall score against all Warmbloods was 14th out of 39 rounds for the day. 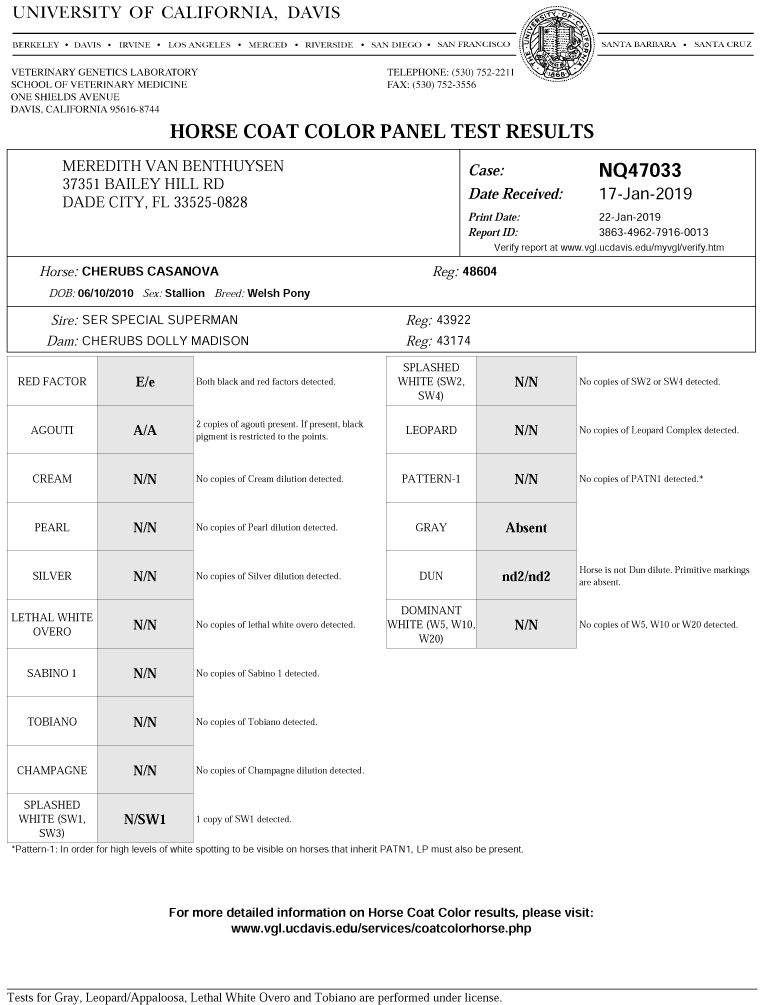